The reason why diesel engines always come with turbochargers

Turbocharger technology has been present in the world's industry for more than 100 years, but is more common in diesel engines than gasoline.

Why do diesel engines have to go with turbo? 75
With cars using internal combustion engines (gasoline, oil), in order for the car to run, there must be an explosive chemical reaction in the combustion chamber. This reaction will occur when the fuel is mixed with the air under the right conditions. In order to increase air into the combustion chamber to make the combustion process more efficient, a turbocharger system was born.

On November 16, 1905, Swiss engineer Alfred Büchi received patent number 204630 from the Reich patent office, Germany. Büchi followed his own idea of ​​using the kinetic energy generated by the high-pressure exhaust gas to compress the intake air mixture before entering the engine. The exhaust gas stream is used to operate the turbine, thereby compressing the intake air before entering the engine, his technique is called turbocharger - turbocharger.

Commercial production began in 1977, which is more than 70 years after its invention, turbocharging dramatically improves engine power. For example, with a capacity of only 3.3 liters, the turbo engine has a capacity of up to 300 horsepower, equivalent to 91 horsepower / liter. By the 1980s, turbocharger technology created a revolutionary period in F1 motorsport. 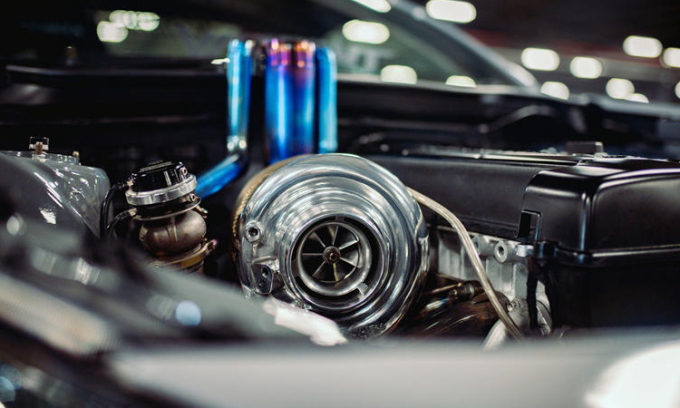 A turbocharger in a car. Photo: Unsplash

Today, turbochargers are a familiar thing in cars. In particular, when governments are increasingly strict in controlling emissions and fuel consumption, engines are also made smaller to reduce these numbers. And the turbocharger is what helps the engine, even though it's small, the power remains constant.

But while nearly all diesels have turbochargers, gasoline engines are sporadic. The main difference is in the fuel combustion.

Oil is harder to burn than gasoline. The reason is that the evaporation of gasoline allows this fuel to mix with oxygen in the air to form a flammable mixture. To create a flammable oil mixture, high pressure and high ambient temperature are required - the reason for the higher compression ratio for diesel engines than for gasoline engines.

In a diesel engine, combustion is spontaneous from the high temperature and pressure in the combustion chamber. At high compression ratios and pressures during combustion, the connection between the connecting rods, crankshaft and piston needs to be very firm. This is also the reason that a diesel engine does not run at high rpm like a gasoline engine, because the materials simply cannot withstand that level of force.

As mentioned, the compression ratio of gasoline engines is lower because gasoline does not need pressure and high ambient temperature when burning. And since gasoline is already injected during the compression stroke, there's no need for an additional compression system, which can damage the engine if it's done at the wrong time. Combustion in a gasoline engine is controlled/started by the spark plug and requires a precise amount of gas to blend the fuel to optimize the process.

The higher compression ratio of a diesel engine also means a larger coefficient of expansion. This results in a lower final temperature obtained by the turbocharger in the diesel engine than in the gasoline engine. Normally, the exhaust gas of oil will be around 800-850 degrees Celsius and in gasoline it is 950-1,050 degrees Celsius.

Heat exchange from the hot turbine area with the bearing housing is protected from high temperatures by the use of a series of water channels and a thermal baffle. This avoids damage to the bearing housing and bearing system, as well as keeping the temperature below the oil limit (the point where the oil begins to crystallize and create very hard, black particles).

The difference in temperature leads to a difference in the technology applied. While the VG (Variable Geometry) system is preferable from a performance standpoint, it remains a challenge to ensure it functions properly in gasoline-fueled applications. Meanwhile, application with colder oil is easy for the whole system. This is the main reason when we often see gasoline engine cars with exhaust turbochargers and every diesel car with VG turbochargers.

The market for diesel cars is sinking after the 2015 emissions scandal. Due to the combustion process of a diesel engine, the system is more likely to produce NOx (nitrogen oxide). From there, specialized treatment systems will be needed to meet the latest emission standards.

Gasoline cars also need to become more efficient to comply with future regulations. One of the solutions is turbocharging VG. A VG system gives the gasoline engine the ability to continuously adjust the turbo's operating point across all operating points of the engine. This ensures every detail works at its most efficient point, creating an overall efficient engine.

So are petrol and diesel the only options for a turbo car? While new vehicles such as plug-in hybrids (PHEVs) and mild-hybrids (MHEVs) require different powertrain concepts and different turbo technologies, the main fuels are gasoline and diesel. Many original equipment manufacturers are experimenting with lower quality gasoline as well as gasoline with a higher ethanol rating to see if they can achieve the same level of engine performance. This will require some special standards for the turbocharger. In the future, we will likely see different fuels appear on the market as well as different regulations for turbochargers.