The latest Ford Ranger price in May 2021 and specifications

Dubbed "the king of pickups", Ford Ranger cars have always led in sales in the pick-up segment in the Vietnamese market for many years. In the ranking of vehicle sales in the first quarter of 2021, Ford Ranger sold 3,873 units, up 2 times over the same period last year. Meanwhile, Toyota Hilux sold only 803 units, Mitsubishi Triton sold 451 units.

The reason the Ford Ranger has such a good purchasing power is because the car has a youthful, muscular design, is equipped with many safety technologies and supports good driving in mountainous terrain, gravel, mud, etc. .. that has been proven over the years always peaking in sales, trusted by customers. The machine is strong, durable and fuel-efficient, with a variety of versions for customers to choose from.

According to newly updated information, the 2021 Ford Ranger pickup truck will be assembled at the Ford Hai Duong factory, and in the near future will be opened for sale in the first batch in Vietnam. It is expected that the price of locally assembled Ford Ranger will be lower than that of imported cars, thus putting more pressure on rivals such as Toyota Hilux or Nissan Navara, Mitsubishi Triton... Ford Ranger 2021 latest update.

Currently, Ford Ranger 2021 has up to 6 versions for customers to choose from, including both manual and automatic transmissions. In addition, customers also enjoy discounts from Ford in May and change depending on the time of purchase.

Car models are discontinued but some dealers are still in stock, customers wishing to buy can contact dealers for more details.

Below is the price list of the Ford Ranger wheelchair including costs such as registration, tolls, registration tax, ....

*Note: the above rolling price is for reference only, the price does not include promotions at the dealer (if any), the price may vary depending on the area and equipment of each vehicle.

Below is information about the price of the New Ford Ranger 2021 pickup truck compared to current competitors in the same segment such as Mitsubishi Triton, Mazda BT-50, Toyota Hilux, Nissan Navara

Although, Mazda BT-50 and Nissan Navara are the two cheapest models in the segment, but sales are still unable to turn on the top compared to rivals like Ford Ranger or Toyota Hilux... 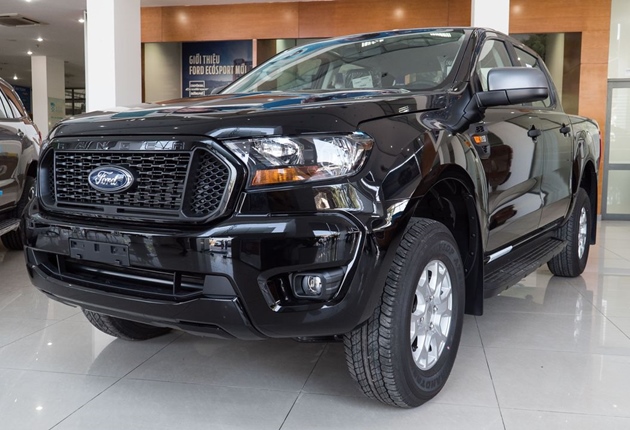 Focusing mainly on high-rise vehicles such as SUV or Crossover, Pick up has brought certain successes to Ford, especially the name Ford Ranger.

American design, outstanding off-road ability, good wading are what the Ford Ranger shows itself to be the king of pickups.

The overall design of the Ford Ranger has a noticeable change in the front, having the same design as the version previously launched in Thailand. However, the chassis dimensions with Length x Width x Height are respectively 5,362 x 1,860 x 1,830 (mm), the wheelbase of 3,220 mm and the ground clearance of 200 mm remain the same compared to the previous generation. 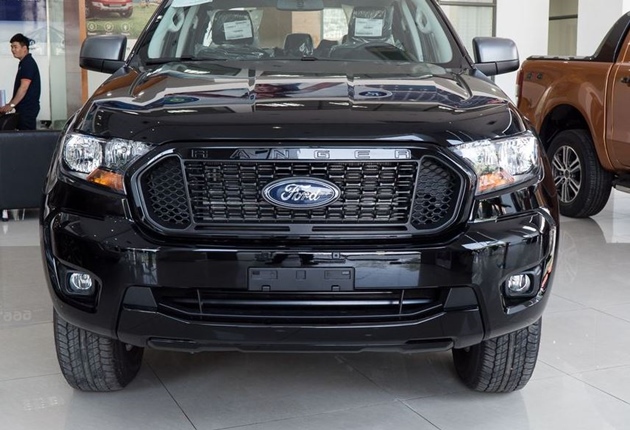 The grille frame and front bumper have a uniform, thick design that looks extremely aggressive like a giant nose, painted in glossy black. The grille has a 3D eye style and changes to black paint instead of gray on the old version. The lighting system continues to be equipped with square Bi-LED balls, fog lights, .. However, the headlight cluster has been painted dark instead of chrome on the version in early 2020. 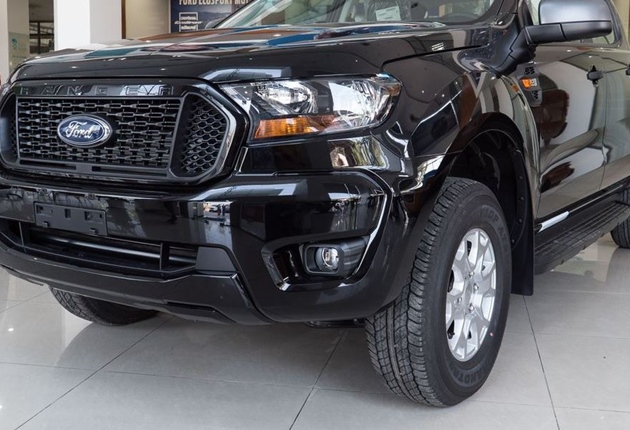 The headlights equipped on the Ford Ranger 2021 high-end version use LED technology with Projector bulbs capable of automatically turning on / off according to the light sensor equipped on the vehicle. Lower versions use Halogen Projector bulbs, but the design remains the same. The LED daytime running lights are similar to what appeared on the old version. 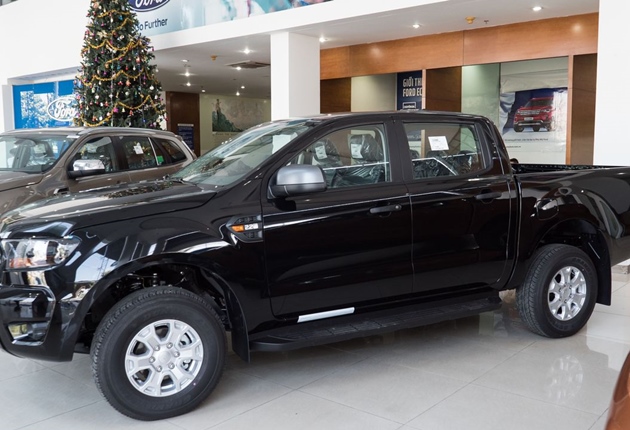 The body of the car still retains the car's school style, compact and very sporty shape. The wheels are upgraded with a 6-spoke double-spoke black painted on the high-end version, the regular version has a large 18-inch structural spokes unchanged from before. Electric folding rearview mirror with integrated halogen turn signal light. Smart sensor door handles are also included. 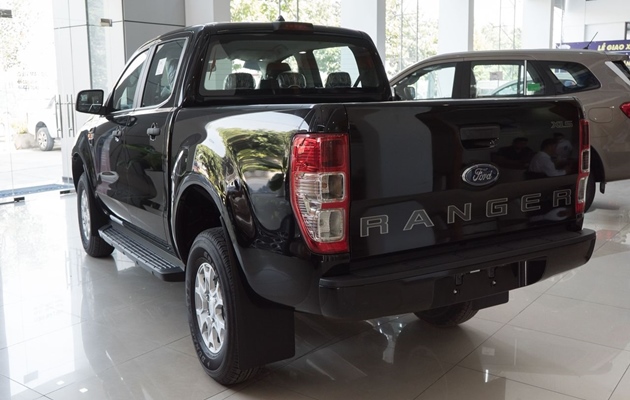 The rear of the Ford Ranger Wildtrak 2021 has almost no change, the taillights have been refined to be more beautiful, but still use regular bulbs, not LEDs. The camera system / reverse sensor is fully integrated on this most advanced variant.

The electric lid closure feature allows users to control it from the convenient cabin, but unfortunately not integrated on the Ford Ranger 2021 for the Vietnamese market.

The overall interior layout has not changed, 2 tones of color coordination on the most advanced version include black leather and yellow-orange stitching according to the car color.

Taplo uses high-quality leatherette materials to add luxury, the center is an 8-inch entertainment screen that is not similarly upgraded on the old version. The air conditioning system, the central control position maintains a simple design, enough to use without any difference. 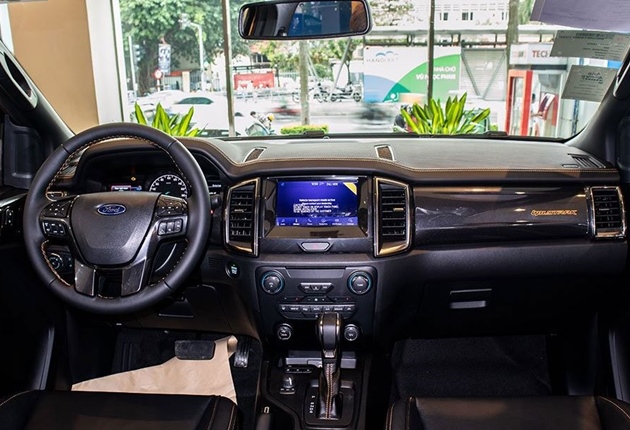 Seats are equipped depending on the level according to each version including leather seats and synthetic vinyl seats, 6-way electric driver's seat. The rear seats provide 3 spacious seating positions, which can be flexibly folded, accompanied by headrests and armrests. The legroom between the 2 rows of seats is quite comfortable. 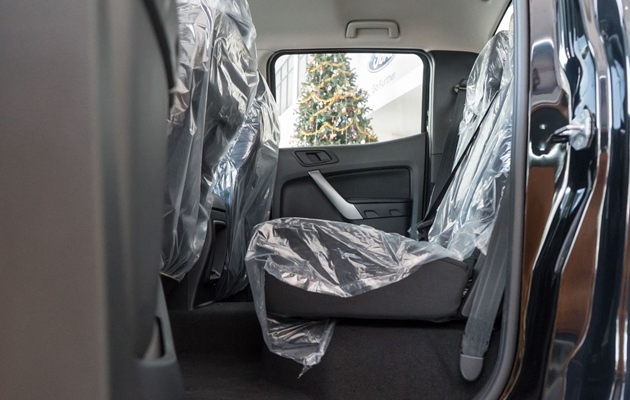 The amenities equipped for a better user experience thanks to the SYNC 3.4 infotainment system include: 8-inch touch screen with USB/AUX/Bluetooth connectivity and smartphones via Android Auto/ Apple CarPlay... and the output is an 8-speaker audio system. The amenities will vary depending on the version of the Ford Ranger.

The operating engine of the Ford Ranger 2021

Ford Ranger 2021 has 5 versions and 3 engine options including:

Safety features of the Ford Ranger 2021

On the newly launched generation of Ford Ranger, according to user reviews, this new version has been omitted a lot of driver-assistance safety features, the remaining features are equipped such as:

With a strong, aggressive American design and proven performance over many generations, the Ford Ranger 2021 is definitely a very tough opponent of pickup trucks in the same segment such as Toyota Hilux, Mitsubishi. Triton, Nissan Navara, Chevrolet colorado,...