Wall Street fell sharply in the last session of the week, as investors worried that the Fed's interest rate hike would push the US into a recession.

During the session, the DJIA sometimes lost more than 800 points. Currently, the index has dropped more than 20% since its last peak in January and is in a bearish zone. The S&P 500 has been in this zone before. 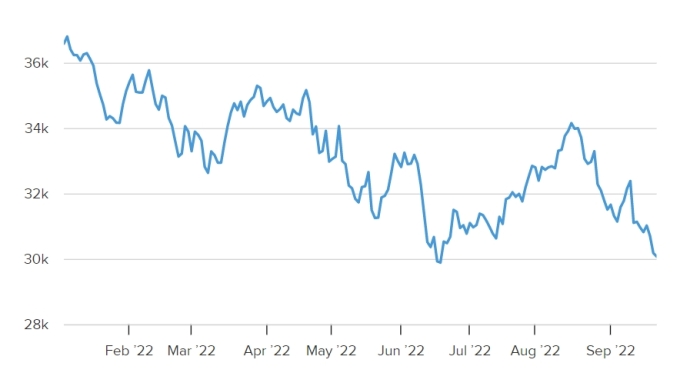 Movement of the DJIA this year. Graph: CNBC

"Another indicator has entered a bear market," said Brad McMillan, chief investment officer at Commonwealth Financial Network. "This year has had four downs and three ups. That's not a good thing."

Wall Street has fallen for 4 consecutive sessions. In total, over the past 6 weeks, the main indexes on the US stock market have fallen for 5 weeks.

Investors currently do not have many channels to pour money. Stocks are falling and the bond market is selling off, sending yields soaring to 11-year highs. Yields on 10-year US government bonds fell slightly yesterday, but remained close to 3.7%. The 2-year yield is currently above 4.1%. However, this rate of return is still considered higher than stocks.

Wall Street is now concerned that the US Federal Reserve (Fed) interest rate hike may continue to drive up borrowing costs, thereby affecting corporate profits. If the Fed is determined to slow down the economy to control inflation, a recession could cause consumers to reduce purchases of listed companies.

Ivan Feinseth, chief market strategist at Tigress Financial Intelligence, said the sell-off is likely to continue, as stock valuations are now under pressure from the Fed. Investors "probably won't see the bottom of the market until inflation figures cool down significantly," he forecast.