US The domestic electric car company dominates the sales rankings for the first half of 2022, with results up to 1.6 times more than the runner-up.

In the first 6 months of this year, there were 228,989 newly registered Tesla vehicles in the US, up from 142,543 vehicles in the first half of 2021. This result helps the electric car brand surpass all competitors in the luxury car segment.

BMW ranked second with 157,838 registered vehicles, down 13% over the same period in 2021. The third place belongs to Lexus with 133,616 vehicles. Next are Mercedes (133,520) and Audi (83,471) respectively. The common point of German and Japanese brands is that sales are down compared to the same period last year.

Tesla also continues to dominate the electric vehicle market with a 68% market share. Model Y was the best-selling electric vehicle in the first six months of the year, with more than 103,200 vehicles. Right after is the "sister" Model 3 with more than 97,000 cars. Other top-selling models include the Ford Mustang Mach-E, Tesla Model S, Model X, Hyundai Ioniq 5, Kia EV6 and Nissan Leaf. 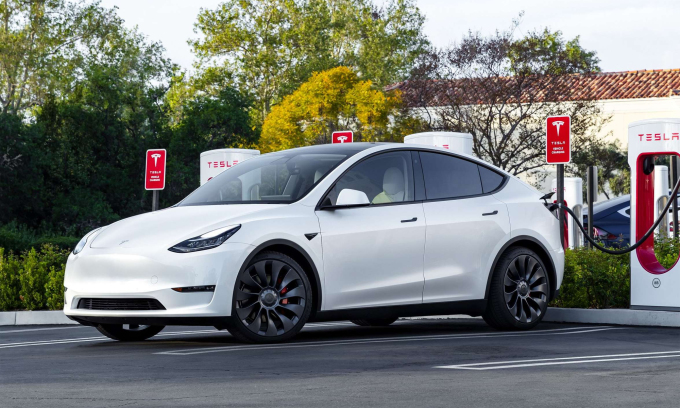 Model 3 electric vehicle at a Supercharger charging station in the US. Photo: Tesla

Sales data also shows that Ford has more than doubled its EV sales year-over-year, while Kia's sales have increased six-fold thanks to the EV6 model, while Hyundai's results have increased by 150%. Volvo's Swedish electric car company Polestar also enjoyed an eight-fold increase in results. Sales of Audi's battery-powered vehicles alone increased by only 16%.

My Anh (according to Automotive News, Carscoops )