A significantly upgraded sports car, equipped with a range of race technology but still legal on the road.

GT3 RS (RennSport) equips and upgrades many details for maximum performance. The central radiator is an idea first used in the Le Mans race-winning 911 RSR and later in the 911 GT3 R. The central radiator on the new 911 GT3 RS is positioned in the compartment. luggage at the front, which makes use of the space in front to integrate active aerodynamic elements and replaces the previous three-radiator setup. 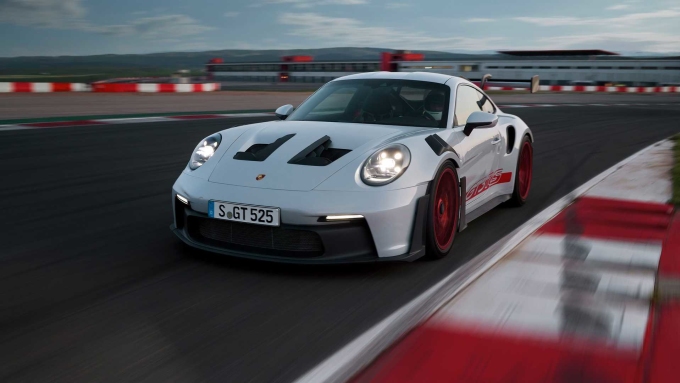 Active aerodynamic elements at the front and two parts of the rear spoiler, combined with a number of other aerodynamic details, help the car have a downforce of 409 kg at a speed of 200 km / h. This means the new GT3 RS produces twice as much downforce as the 992-generation 911 and three times as much as the current 911 GT3. Meanwhile at a speed of 285 km / h, the force is 860 kg, 60 kg more than McLaren Senna at 225 km / h. 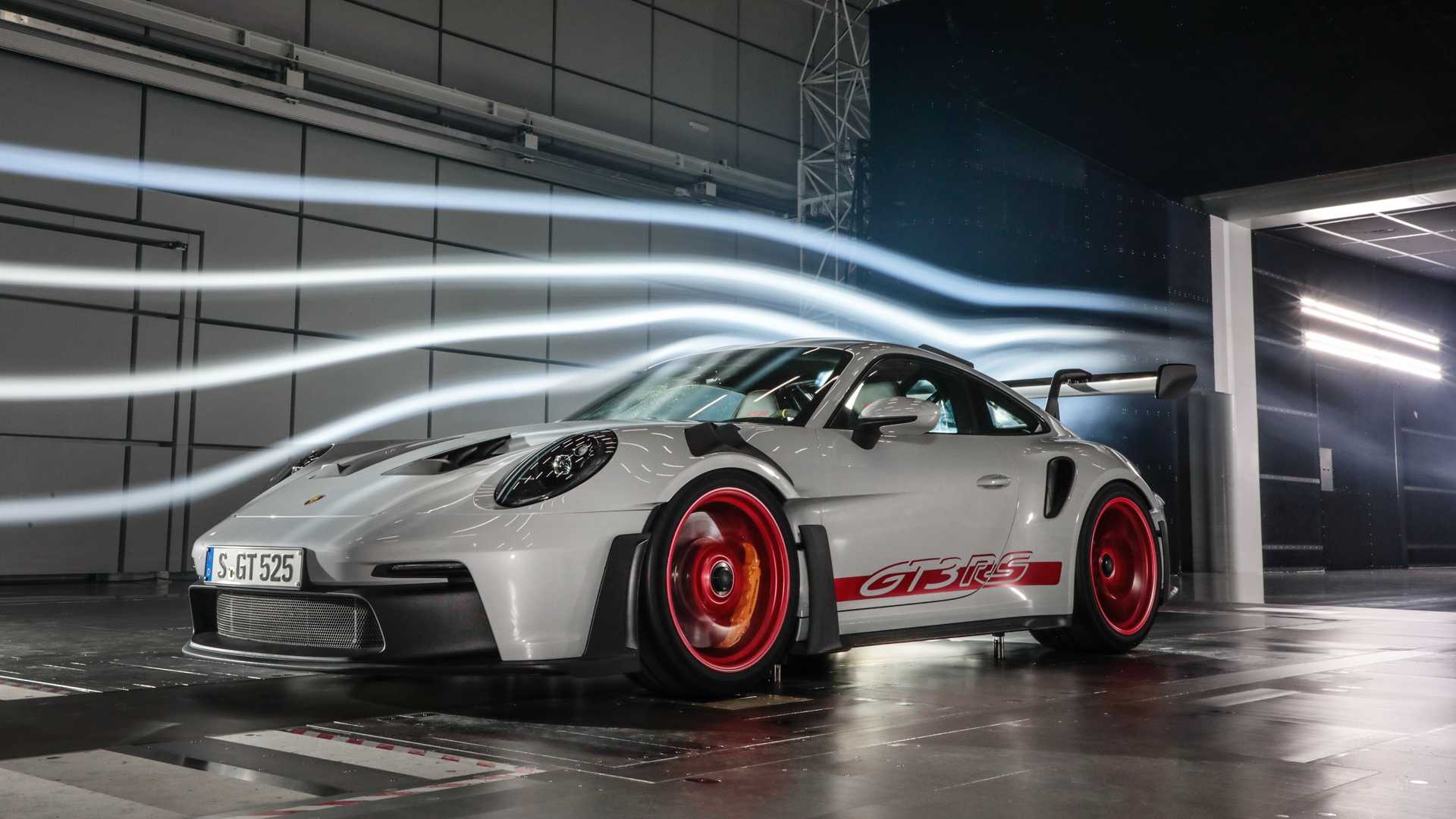 Drag Reduction System (DRS) first appeared on a Porsche. For low drag and higher speeds on straight sections of the track, the DRS allows the rear spoiler to flatten at the push of a button.

The appearance of the new 911 GT3 RS clearly shows the upgraded aerodynamic elements. The highlight is the large, swan-neck rear spoiler, consisting of a fixed main spoiler and a hydraulically adjustable upper wing.

This is also the first time on a Porsche car, the edge of the rear spoiler is higher than the roof. In addition, the front end of the new 911 GT3 RS no longer has a front spoiler, but a front splitter that divides the air flow through and below. This helps to direct the air to the outside correctly. Ventilation in the front wheel arches is provided through vents on the fenders.

The air intakes behind the front wheels, in the style of the Le Mans-winning 911 GT1, help reduce dynamic pressure in the wheel arches. Shields behind the intakes ensure that air is directed to the side of the vehicle. Air from the front radiator will pass through the vents in the bonnet. The fins on the roof help push the air flow farther, ensuring a cooler intake temperature at the rear. 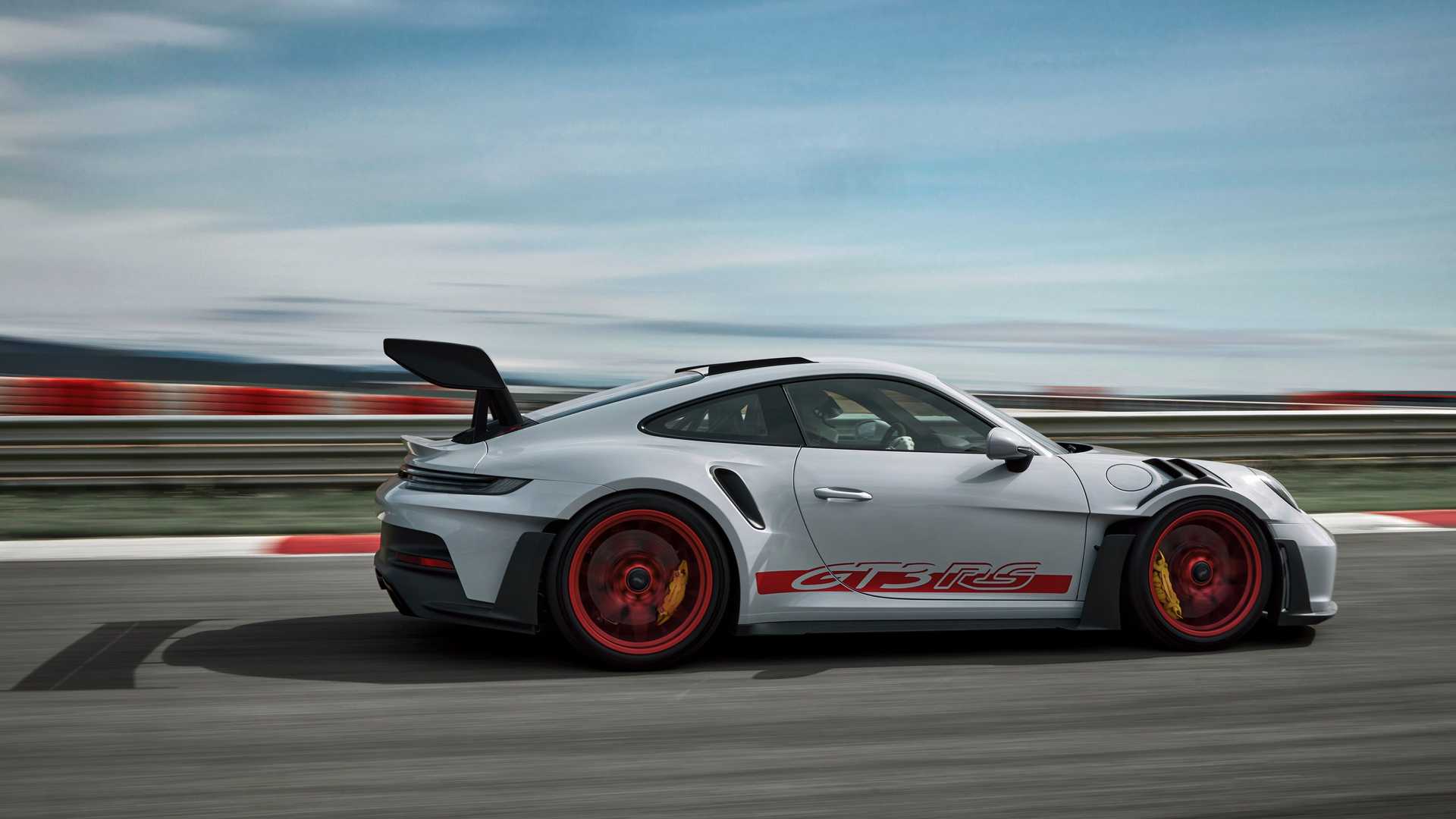 On the new 911 GT3 RS, the rib cage is also used exclusively to improve aerodynamics and does not suck in air during handling. The rear wheel arches also have air intakes and side spoilers for optimal airflow. The rear diffuser from the 911 GT3 has been tweaked.

The suspension system was also noticed by engineers in terms of aerodynamics. Since the wheel arches are subject to strong winds, the teardrop-shaped construction of the components makes up the double wishbone suspension, which boosts downforce by about 40 kg at top speed. This design is only used on high-end sports racing cars. The front track width is increased by 29 mm, which requires correspondingly longer front axle links.

To ensure that the balance between downforce at the front and rear is maintained even when braking from high speeds, engineers have fine-tuned the suspension to reduce shock during braking, the multi-link rear axle has been corrected. change the spring ratio. The driver assistance system and rear-wheel drive system are set up to be more dynamic.

The 911 GT3 RS offers three driving modes: Normal, Sport and Track. In Track mode, basic settings can be adjusted to your liking, including the front and rear axles' bounce and damping that can be adjusted separately and in stages. The rear differential can also be adjusted via knobs on the steering wheel, allowing the rear to be controlled at will. This is done quickly and intuitively borrowed from motorsport.

Four individual control knobs and a button for the drag system are located on the steering wheel. The modes will be clearly displayed through the screen in the instrument cluster during adjustment. The 911 GT3 RS also has the familiar monitor screen from the 911 GT3, with the push of a button, the driver can transfer the necessary information to two 7-inch screens next to the speedometer. 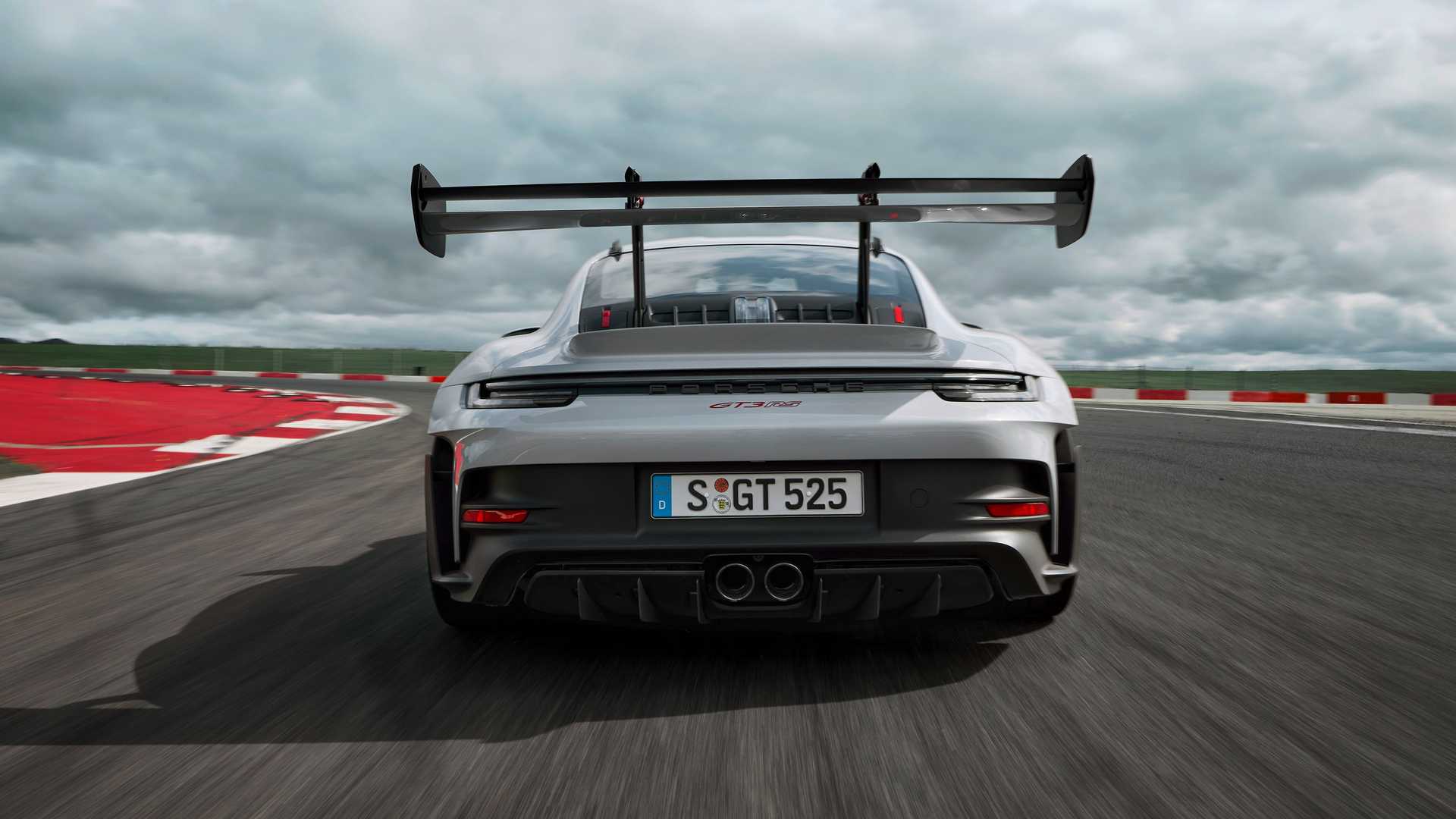 The 911 GT3 RS still uses the naturally aspirated 4-liter 6-cylinder Boxer engine, but has been tweaked to optimize power. Power was increased from 502 to 518 hp, achieved mainly through a new camshaft with a revised camshaft configuration. The engine block is equipped with a single throttle system and a hard-valve actuator derived from motorsport. The car does not have a manual transmission option but only uses a 7-speed PDK dual-clutch transmission. The revised gear ratio is shorter than that of the 911 GT3, and the cooling ducts under the car ensure that the car can withstand many hours on the track with extreme loads. Acceleration time from 0-100 km / h in 3.2 seconds and a maximum speed of 296 km / h.

The aluminum monocoque fixed disc brake system with 6 pistons and 408 mm diameter brake disc at the front. Compared to the 911 GT3, the piston diameter has increased from 30 to 32 mm. In addition, the thickness of the disc increased from 34 to 36 mm. The rear is equipped with 380 mm brake discs and 4 pistons. 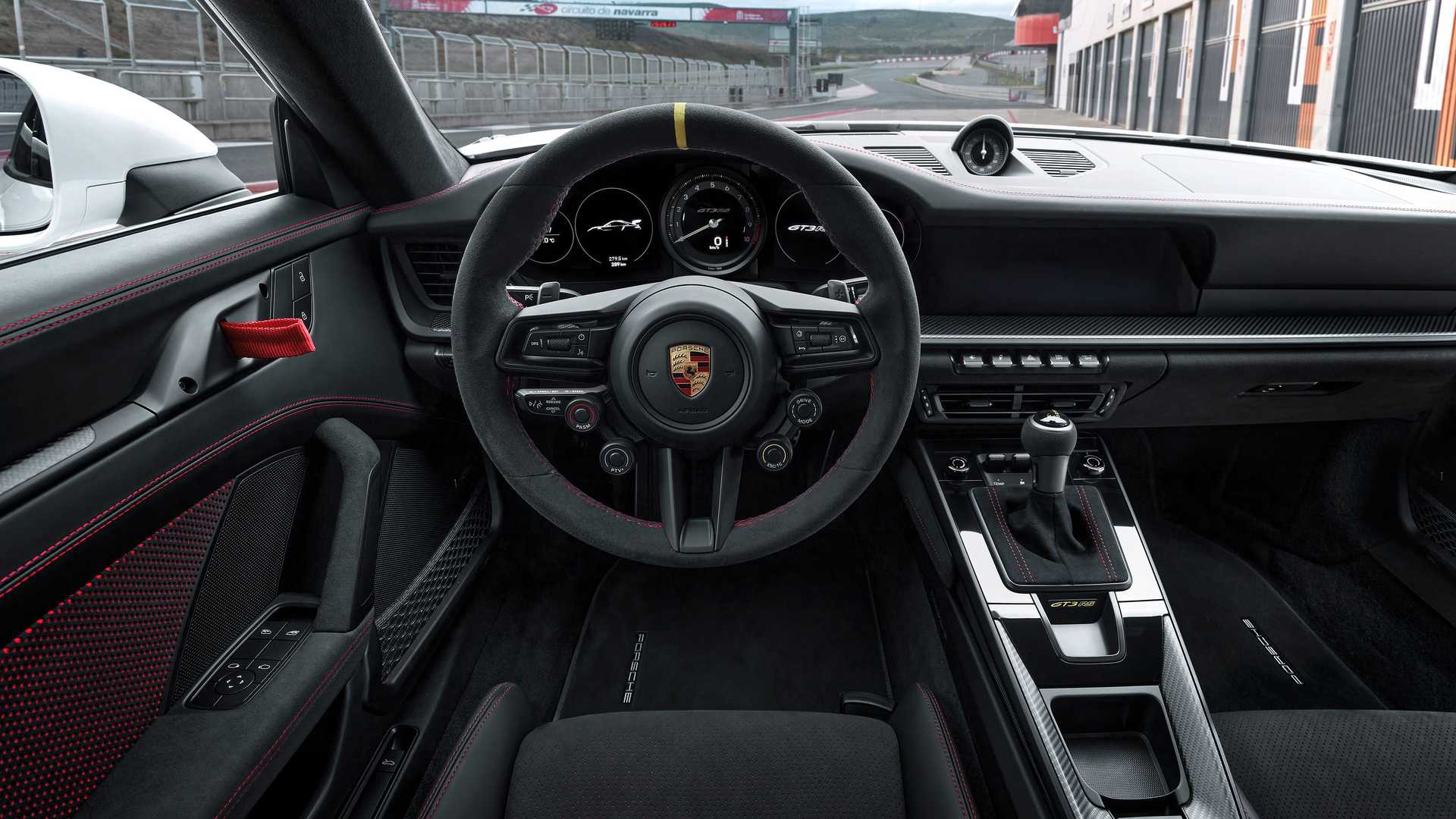 Light construction has been the basis of all RS models since the 911 Carrera RS 2.7. Hence a range of weight reduction measures are used, in which carbon fiber reinforced plastic (CFRP) is used in many parts such as doors, front spoiler, roof, bonnet and standard seats, helps the car weigh only 1,450 kg.

Inside, the car is finished in the traditional RS style, black leather and Race-Tex microfiber suede. Carbon fiber details and red door pull straps create accents. The 911 GT3 RS is available with the Clubsport package, which includes a steel roll bar, a hand-held fire extinguisher and a 6-point seat belt.

Meanwhile, the Weissach package is optional, which adds many carbon fiber details such as the bonnet, roof, rear spoiler parts and mirror caps. Equipped with front and rear anti-roll bars, rear coupling bars and rear axle anti-shear plates made from CFRP contribute to enhancing the vehicle's dynamics. The roll bar is made from CFRP, which helps to reduce 6 kg compared to steel material. 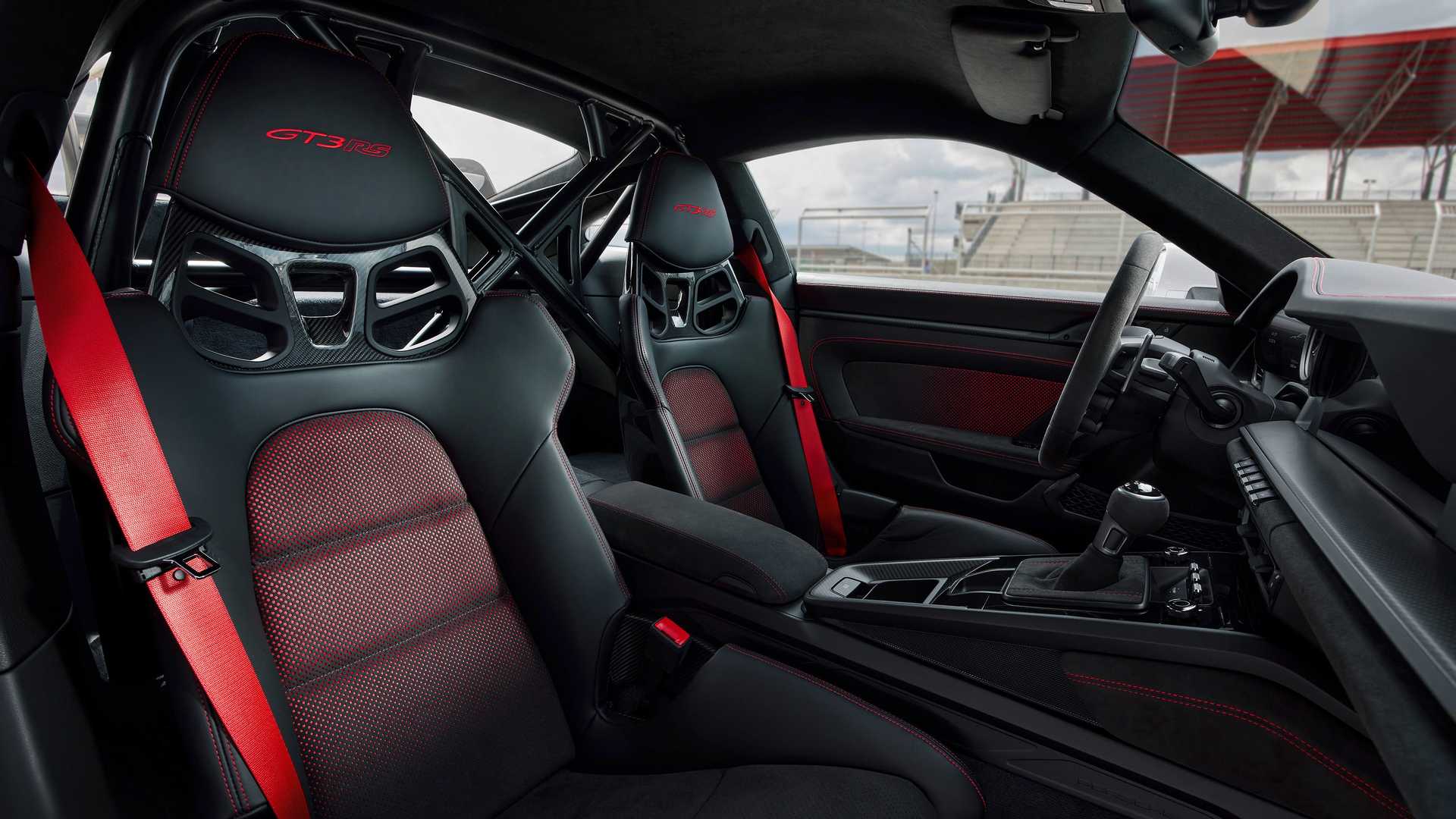