Market capitalization has "evaporated" nearly 16 billion USD since the beginning of the year, many difficulties still surround bank stocks

The banking group is forecasted to continue to face difficulties when market liquidity becomes increasingly sluggish due to the impact of the tightening monetary policy. In addition, increased capital costs and limited credit growth will also affect the business results of banks in the short term. 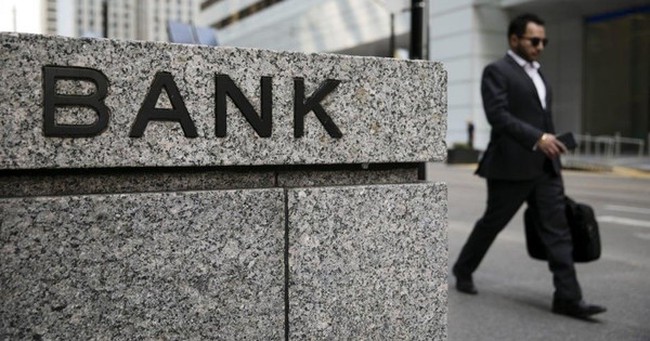 With the market capitalization and profit accounting for the leading proportion, the bank is often likened to a "king" stock on the stock exchange. However, in the context that the market needs a fulcrum to keep the important support level around 1,200 points, the "king" is somewhat "silent and silent".

Even in the last session of the week, the "super pillars" of banking groups such as VCB, BID, CTG, VPB, TCB, MBB,... were all in red, becoming the main burden on the index. Most of the above stocks have dropped to the lowest level since the beginning of August and are tending to find the old bottom confirmed in mid-June.

Except for EIB, all banking stocks have decreased compared to the beginning of the year, many names have lost tens of %. The market capitalization of the whole industry "evaporated" 363,744 billion dong (~15.6 billion USD) to less than 1.54 million billion dong, lower than the time when VN-Index bottomed (1,150 points) on July 6. CTG, VPB, VIB, TPB, SHB have all lost more than 1 billion USD in market capitalization since the beginning of the year, especially TCB has also been "blown away" by nearly 2.4 billion USD. 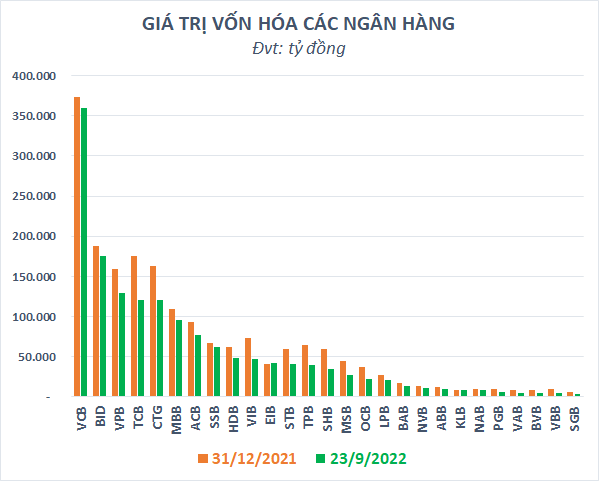 Bank capitalization has dropped sharply since the beginning of the year

Difficulties are expected to continue to surround banking stocks, especially in the context of the global monetary tightening trend. Facing exchange rate pressure, the State Bank of Vietnam (SBV) has decided to increase a series of operating interest rates by 1%, effective from September 23. Accordingly, the ceiling interest rate for deposits with terms of 1 month to less than 6 months increased from 4% to 5%/year; refinancing rate also increased from 4% to 5%. The move comes after the Fed raised interest rates for the third time in a row by 0.75 percentage points and signaled that it will continue to maintain its hawkish policy until inflation is completely under control.

The increase in interest rates by the State Bank is forecasted to significantly affect the cash flow into securities which has been gloomy recently. From the beginning of September until now, the average matching value on HoSE has reached just over 11,900 billion dong, down 16% compared to the previous month. This is the second low since the beginning of 2021, just after the market bottom in July.

With the largest total circulating volume (53.7 billion shares) and freefloat (29.2 billion shares) both on the floor, the banking group needs huge cash flow to absorb the "huge" supply. Even, 11 banking stocks including MBB, VPB, TCB, ACB, SHB, VIB, HDB, SSB, STB, MSB, LPB also had a free float of over 1 billion shares. In the context of increasingly meager liquidity, it is difficult for king stocks to revolt. 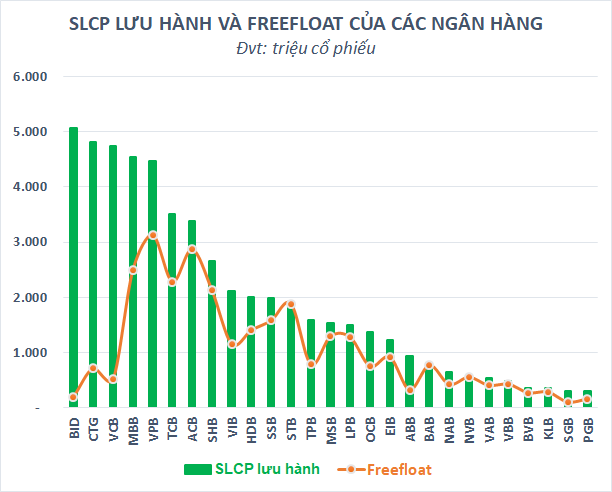 Besides the limited cash flow, investors are also worried that the business results of the banking group will be affected by the increase in capital costs. At the Government meeting on September 22, the Prime Minister asked the SBV to consider increasing the operating and deposit rates, but it is necessary to try to keep lending rates stable to support the economy's recovery after epidemic.

If the output interest rate cannot be increased in proportion to the increase in input deposit rate, the bank's net profit margin (NIM) will be reduced. Besides, demand deposits (CASA) are also affected because cash flows on current accounts tend to look for term deposit channels with higher interest rates. 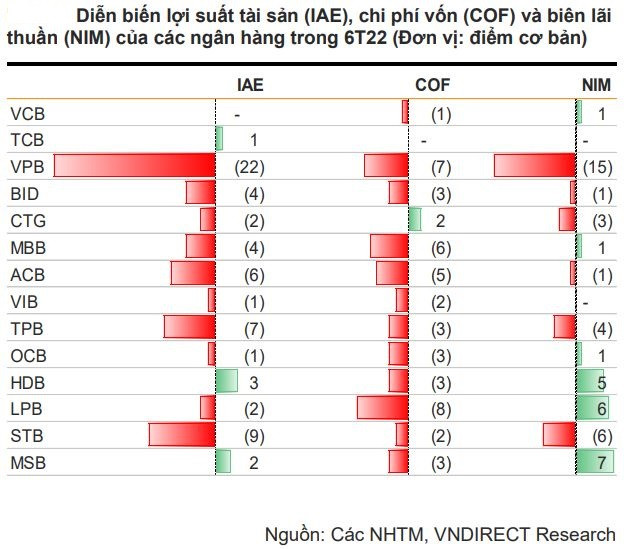 However, the impact will not be the same for each bank. Yuanta Securities Vietnam believes that banks with low loan to deposit ratio (LDR) such as HDB, MSB, VIB, VPB, or banks with short-term capital ratio provide medium and long-term loans. as low as ACB, HDB, MSB, VPB will be less pressured on NIM. In particular, banks with high demand deposits (CASA) such as TCB, MBB, and VCB will be better able to withstand the impact of the rising cost of capital.

Another important driver of banks' profitability is that credit growth is very limited in the face of inflation risk. Ms. Nguyen Thi Hong (Governor of the State Bank of Vietnam) said that the State Bank will continue to maintain the credit growth target of 14% for 2022 as planned from the beginning of the year, although there have been some suggestions before. raising the target of systemic credit growth to 15-16%.

This move shows the SBV's caution against possible fluctuations and risks, when (1) the Fed will definitely continue to raise interest rates by the end of this year, (2) the strong USD appreciation puts pressure on the USD. forces on Vietnam's exchange rate and (3) inflationary pressures. Besides, the SBV wants to prevent the race to increase deposit interest rates among commercial banks when the domestic credit demand is very strong at present.

At the beginning of September, the SBV extended credit limits for 18 commercial banks. According to the new credit lines of these banks (accounting for 80% of system credit), VNDirect forecasts total credit growth will reach nearly 13% by the end of the year. With the primary goal of controlling inflation and stabilizing the macroeconomy, this securities company believes that it is unlikely that commercial banks will receive additional credit lines from now until the end of 2022. 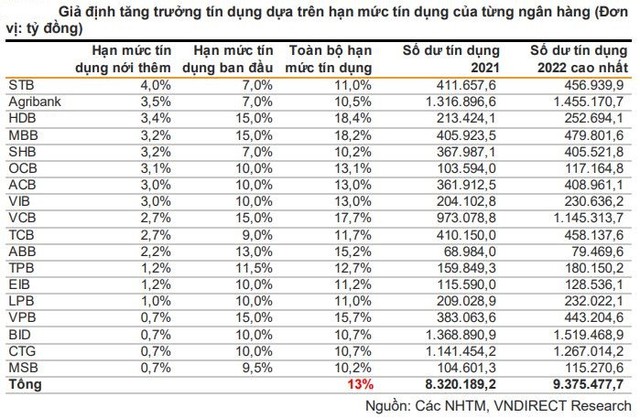 The recent market correction has sent banking sector valuations low with a median PB 2022 of 1.3x, 35% below the 3-year average of 2x. Currently, most of the banking stocks have PB below 1.5 except for a few names like VCB, BID, SSB, HDB, STB, BAB, NAB. 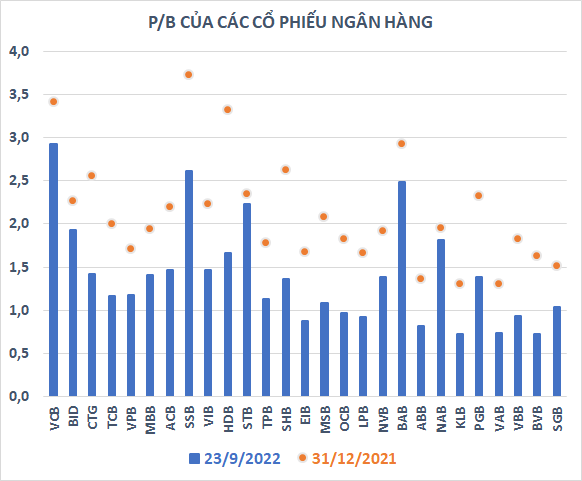 Valuations of bank stocks are low

In addition, the market sentiment towards the banking group was further affected when the capital market began to come under closer supervision despite the aim to improve the transparency and sustainability of the capital market in the long term. . However, VNDirect believes that banks will be able to overcome this difficulty thanks to their good control over high-risk lending segments.

On the other hand, Mr. La Giang Trung - CEO of Passion Investment has a more cautious view of king shares. This expert said that the banking group is usually very good in the boom period of the economy and there are some difficulties in the quiet growth period. Therefore, the outlook in the last months of this year and the whole of next year is not so good. Investors should only return to banking stocks when the economy grows strongly again and interest rates are low.