Microsoft stopped supporting Internet Explorer from June 15 and asked users to switch to another browser.

By the afternoon of June 15, users could still open Internet Explorer (IE) to browse the web. However, the browser will automatically open an additional window saying "Internet Explorer will stop working on June 15", and recommends switching to Edge. Any data from the old browser will be synced by Microsoft with Edge. 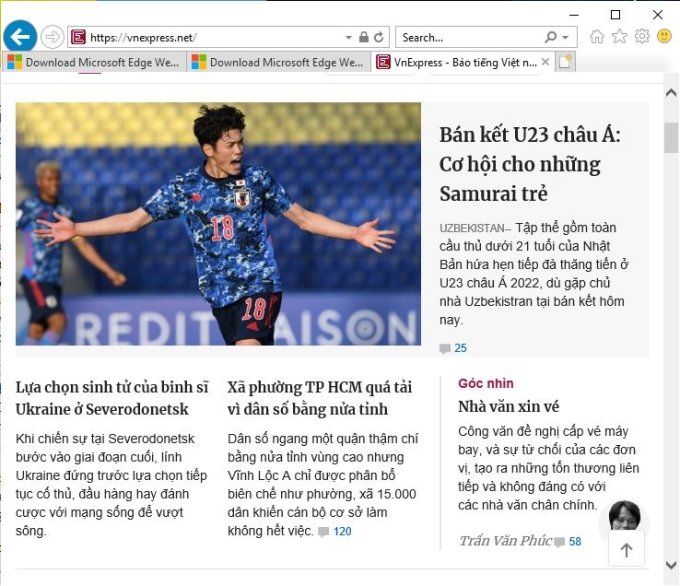 Thus, after 27 years of operation, Internet Explorer is officially dead. This browser was born in 1995, was the main gateway to help computer users at that time participate in the Internet world. At an early stage, IE was installed via a CD-ROM drive, before it was built into the Windows operating system.

This integration makes Internet Explorer once the most popular browser in the world. However, after that, it was judged to be slow and difficult to use, gradually being taken over by Opera, FireFox and later Google Chrome. Another Guardian survey showed that 28% of participants are still using IE, while the rate with Chrome is 81%. The reason IE is still used is that it is installed by default on Windows computers. Users still have to open it before downloading another browser.

The death of Internet Explorer was announced by Microsoft last year. "The Internet Explorer 11 desktop application will be discontinued and no longer supported in June 2022 for certain versions of Windows 10," Sean Lyndersay, Microsoft's Edge program manager, said in a statement. May 2021.

In a submission to the Australian competition regulator last year, Microsoft said the reason for its death was because most developers are now less able to build IE-compatible websites.

Before that, in 2015, the company launched Edge browser using Chromium core similar to Chrome with the goal of becoming an alternative to IE. For enterprise tasks that require the use of older models, Edge is equipped with "IE mode" to support this. Since last year, Internet Explorer is also no longer supported on services like Office 365, Outlook, Teams.

Although no longer used much, Internet Explorer is still a popular browser because it is associated with the celebration of the new Internet boom at the end of the 20th century.

A survey by the Australian Competition and Consumer Commission conducted in September 2021 found that Internet Explorer is the second most popular browser with 85%, after Chrome (95%). Other browsers such as Firefox, Safari, and Edge have recognition rates of 81%, 80% and 69%, respectively.