It is the first supercomputer to achieve exascale performance, capable of processing 1.1 trillion operations per second.

The US has regained the top spot in the list of countries with the most powerful computers in the world with the first supercomputer to surpass the exascale performance threshold. According to information published on Monday, May 30, Oak Ridge National Laboratory announced that the Frontier supercomputer powered by AMD has achieved 1.1 exaflops, or 1.1 trillion operations per second. .

The machine, built by Hewlett Packard Enterprise Corporation, easily beat the previous record holder, Fugaku, a Japanese supercomputer that registered its highest computing performance last June of 442 petaflops - less than a year. half the speed of the current Frontier. Before Fugaku, this position belonged to the Summit supercomputer built by IBM.

"Frontier is ushering in a new era of exascale computing to address the world's greatest scientific challenges," Oak Ridge Laboratory Director Thomas Zacharia said in a statement. "And this milestone only provides a preview of Frontier's unparalleled capabilities as a tool for scientific discovery." 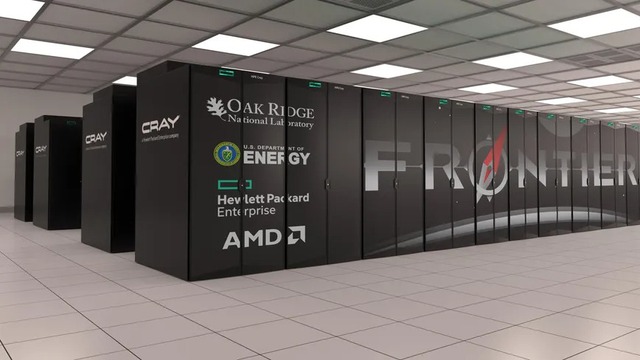 Supercomputers are giant machines that can take up the entire floor space of buildings and consume as much electricity as a town. They are used for tasks such as simulating nuclear weapons explosions, calculating global climate change effects, and space physics. They could also demonstrate capabilities in medical research such as assisting in drug development - an important ability that is receiving increasing attention due to the rapid spread of the recent COVID-19 pandemic.

Frontier's system features 9,408 computing nodes, each with a 64-core AMD "Trento" CPU paired with 512 GB of DDR4 memory and four AMD Radeon Instinct MI250X GPUs. Those buttons are spread out in 74 HPE Cray EX cabinets, each weighing 3.6 tons. In total, the system has 602,112 CPU cores tied to 4.6 petabytes of DDR4 memory.

Additionally, the 37,888 AMD MI250X GPUs have 8,138,240 cores and 4.6 petabytes of HBM memory (128GB per GPU). The CPU and GPU are tied together using an Ethernet-based HPE Cray Slingshot-11 network fabric. The entire system uses a direct water cooling system, with 22,700 liters of water being moved through the system by 350 horsepower pumps – these pumps can fill an Olympic-sized swimming pool in just 30 minute.

The entire system is connected to an extremely efficient storage subsystem with 700 petabytes capacity, 75 TB/s throughput, and 15 billion IOPS (Input/Output per second) performance. One tier of metadata storage is powered by 480 NVMe SSDs providing 10PB of overall capacity, while another 5,400 NVMe SSDs provide 11.5PB of capacity for the primary high-speed storage tier. Meanwhile, the 47,700 PMR hard drives offer a capacity of 679PB.

Assembling the Frontier was also a challenge, as the lab had to prepare 60 million parts with 685 different parts to build the system. The chip shortage occurred during construction, affecting 167 of those parts, so the number of missing parts numbered at 2 million. AMD also encountered a problem when 15 parts for their MI200 GPU ran into shortages. To handle it, they turned to the US government, invoking the National Defense Act to get priority to buy parts due to Frontier's importance to national security. 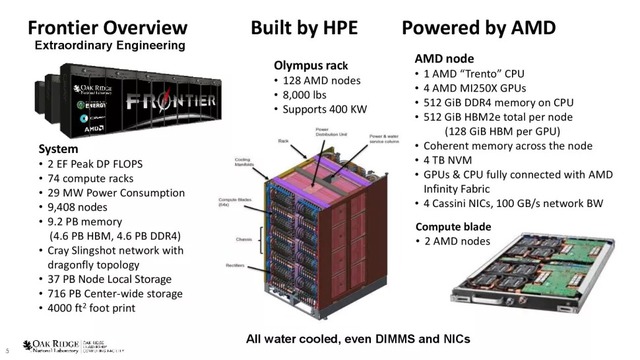 The scale of the supercomputer Frontier.

While the US tops the list of the world's fastest supercomputers known as the Top500, the counterweight country China dominates the list by volume, with 173 systems. Meanwhile, the number of American systems on the list has dropped from 150 to 126.

Frontier also took the top spot on the Green500 list, which rates the energy efficiency of supercomputers. Frontier's power efficiency reaches 52.23 gigaflops per watt. Published in 2007, the Green500 list is published two to three times a year. It often serves as a sequel and support to the Top500 list.

And while the sheer scale of the Frontier supercomputer is breathtaking, it's just one of many achievements by AMD on this year's Top500 list. Systems using AMD processors now include 5 of the world's top 10 supercomputers, and 10 of the top 20. In fact, AMD's EPYC processors are now in the top 94/500 supercomputers in the world, marking a steady increase from 73 systems in November 2021, and 49 systems in June. 2021. AMD also appeared in more than half of the new systems on this year's list.

In terms of energy efficiency, AMD also takes the top spot on the latest Green500 list. The company has 4 of the most efficient systems in the world, and also has 8 of the 10 best systems and 17 of the top 20.